when do your chooks go inside?

Do you keep livestock? Having any problems? Want to talk about it, whether it be sheep, goats, chickens, pigs, bees or llamas, here is your place to discuss.
Post Reply
21 posts

when do your chooks go inside?

I'm asking because mine tend to go in at around 7.30, which is quite dark already! And also when the kids are going to bed. Is this normal, or are they just brave and foolhardy? I have shone a torch in at night just in case there is anything that might be biting but can't see anything. I thought then went in to roost at dusk?
Top

I'm not the most experience person, but mine go in as it starts to get dark, today it was about 7pm. But if I've been to the allotment they will stay out later to eat the tasty treats I bring home for them (slugs and weeds). I have noticed that as the light goes they start edging closer and closer to the coop until they're right up to it. Then they hang around a bit longer until the steps up to the pop hole are quite dark. I think so long as they can see the coop, they're OK (assuming they're not in danger from predators). I'd be interested to read the replies of more experienced folk though. It is hard when they go to bed the same time as the children. You don't know who to deal with first. Thankfully, it's only for a couple of weeks and then they'll be going before the children's bedtime.
Rosey xx
Top

Mine always seemed to be more unsure of going in in the autumn than at any other time of year.A couple of things come to mind,maybe temp has something to do with it,and more likelyin the autumn they will still find a lot of grubsetc on the ground.What I used to do when the pub was calling,and the little sods wouldn't go to bed,(and with 500 you could be sure there was at least one) was chuck a hand full of corn just inside the entrance,then when the last one went in whip the door closed in a flurry of feathers!
Top

So it's not just mine! It was tipping it down this evening, and the kids were pajamaed up ready and the chooks were defiantly scratching around for worms, drenched, lingering near the coop. I just had to do the kids first, and now i've just been down to them and they're in and locked up. They're not in my good books today, having been let out of the run for the afternoon and eaten all my last naustaurtiums, demolished my mint, and then crept up on me in the kitchen, led by the bravest ringleader one, and letting off a big poo each. As if I don't have enough to contend with potty training my youngest......
Top

I'm new to keeping chickens and the first one was quite happy to go into the coup part at all times of the day but then she is / was only about 6-8 weeks old and on her own. We got another goldline last saturday whilst my wife was at the footie and she was put in the basket we have at about teatime as she was fighting with the first one. these last two days they have been out all day together and have got on fine but neither would go near the coup or basket even though they were drenched. At about 6.30 the durham black was well tucked up in her coup and the goldline was frantically pacing all around looking for somewhere to perch so she went in the basket as the full size coup is not getting made until the weekend...
Member of the Ishloss weight group 2013. starting weight 296.00 pounds on 01.01.2013. Now minus 0.20 pounds total THIS WEEK - 0.20 pounds Now over 320 pounds and couldn't give a fig...
Secret Asparagus binger
Top

Different chooks seem to go at different times. My ex bats used to stay up virtually all night - they were in a wire run so completely safe. The banties used to go to bed about 3 in the afternoon. My current hybrids wander off as it's starting to get dark. You can try putting a solar light inside their house. That does tend to draw them in. Then, as Oldjerry says, a handful of corn will get them inside.

Mine go to bed just before dusk! It surprises me that they don't stay out longer, mind you whenever I've got newbies they have stayed out much longer and have had to be shooed in, but they soon follow what the oldies do and go to bed early like them too.

Ours sound just like everyone elses!! They mooch closer to the house the darker it gets, one in particular is in as soon as the light begins to fade but Grant(rooster!) Is usually the last in when the light has finally gone. I'm quite lucky as there is no rush to close the door up as the chooks live in the paddock were r dogs live so the dogs seem to keep foxy at bay. On a warm afternoon its quite a bizarre site as the chooks lie up the side of the ferret run along with the dogs and cats catching the rays, who says animals can't get on!!!!
Top

Hey, at least yours go into their coops

Mine roost up a tree. They have a lovely house but have always slept up in the tree. Unless there's a storm then I make them go in their house.
My blog - http://ourweefarm.blogspot.com/
Top

Many of ours won't go in until it's blowing a gale. And then they can't because they've been blown into the fences and can't unstick themselves!

Some of the pullets will go in if its raining hard, but most prefer to go and hide beneath an upturned dinghy.

As for the night time, I always have to find and catch a few by torchlight. Our doziest cockerel decided to sleep in a pool of mud two nights ago—I thought there was something wrong with him but he proved me wrong by screeching, flapping and showering me in stinking muck. Then he stalked off to his house. As for the hens, they get on the big henhouse roof (10 feet off the ground), they roost in trees, they hide in the hedges and one even tried to move in with the pigs.

The joys of chooks.

Thanks for the laugh Stoney!

That's crofting for you—a laugh a minute. Just like today...

My girls will stay out quite late , I've got fed up of waiting for them recently so have started shutting them into the run attached to the house and leaving the actual house open - saves a lot of noise in the morning too when they get up before me

That said our garden it completely enclosed - it would take a very determined predator to get in!
Also I will have to remember to go and shut their door when it gets a bit colder....
...um, how can I make that?...
Top 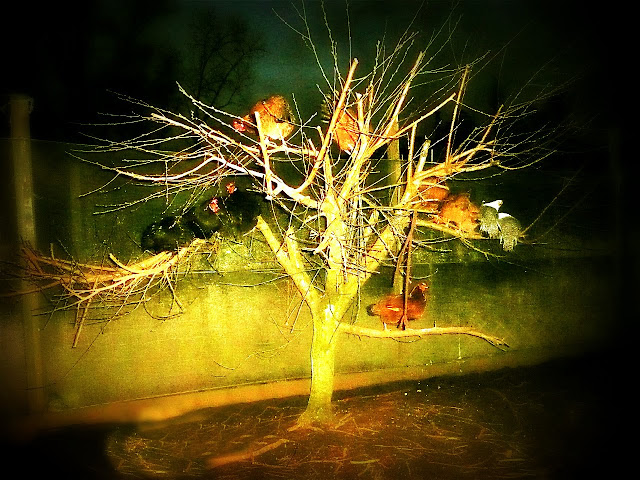 this is what mine do!
My blog - http://ourweefarm.blogspot.com/
Top
Post Reply
21 posts