Foods for free. Anything you want to post about wild foods or foraging, hunting and fishing. Please note, this section includes pictures of hunting.

Sorry to say that Selfsufficientish or anyone who posts on here is liable to make a mistake when it comes to identification so we can't be liable for getting it wrong.
Post Reply
50 posts

Hang on, hang on- before we go any further it's illegal to go hunting with a bow and arrow. I did not know that. What about a catapult? A javelin? etc and does it matter what you hunt?
First we sow the seeds, nature grows the seeds then we eat the seeds. Neil Pye
My best selling Homebrew book Booze for Free
and...... Twitter
The Other Andy Hamilton - Drinks & Foraging
Top

Yep, hunting with bow and arrow, or crossbow with pointed darts or spear hunting is illegal in the UK. I think that it might still be possible to hunt with a crossbow and - this may sound daft - hard, round rubber-headed crossbow darts (that are designed to smash and stun/kill rather than penetrate). It's gone a bit barmy here, really.
Top

hubert hubert wrote:Yep, hunting with bow and arrow, or crossbow with pointed darts or spear hunting is illegal in the UK. I think that it might still be possible to hunt with a crossbow and - this may sound daft - hard, round rubber-headed crossbow darts (that are designed to smash and stun/kill rather than penetrate). It's gone a bit barmy here, really.

Crossbows are illegal, strangley catapults arn't but I would'nt dream of it,they are legal only to use against small game/vermin.

For me and the hunting folk I speak with, with everything we hunt we try to ensure a clean kill and no suffering.

I think the majority of hunter/shooters believe this.
Top

I am a hunter, a target shooter, and I reload ammunition. I have several firearms, I consider myself lucky to live in the USA where most firearm hobbies are still Legal and affordable with few infringements. I hesitated to mention this on this forum for fear that this isn't a very "ISH" type of thing to do. I'm glad it's well received, as long as it's done in a very conservation-ISH way. I, myself, hate waste, especially in this hobby. I think the big difference to me is I enjoy the harvest more than the thrill of the hunt.

now to bring this discussion to the next level. Have any of you heard of "OK Noodling" or hand fishing ? it is Legal in only 4 states in the USA, and I don't understand why it would be illegal ?

and lastly this is a documentary that I seen on public TV, this website has a trailer (preview).
http://www.okienoodling.com/#
Top

ha, interesting technique, not sure I fancy usin my arm as bait tho!

I hate waste too, just made pheasant soup out of a couple roasted birds, love the new season so much FREE pheasant..
Top

We do hunt. These are wild goats: 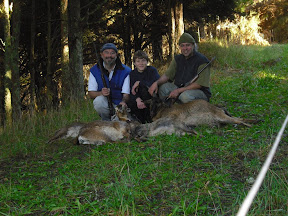 They were released by humans and now run wild here in New Zealand. They have no predators here. Anybody who knows a bit about goats can imagine what damage they can do on the native flora. We use their meat and skins. 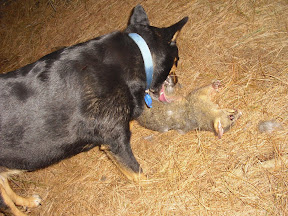 Released here in the late 19th century for fur. Again, in New Zealand there are no predator animals (we have only two type of bats here which are the only native mammals). We use their fur for spinning and weaving. We tried them on the BBQ and they are nice. But we don't tell anyone because then people look at you as if you would say yo are eating rats. 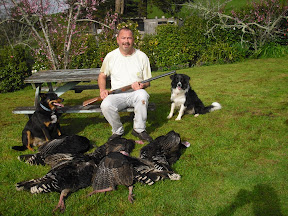 Hundreds of them. Again, released to hunt them. They are said to carry the Tb virus. They eat shedloads of grass. We find them delicious.

Why do we hunt? We "own" this piece of land here and we feel we are responsible for it. If we wouldn't do anything against those "unwanted animals" we would get overrun by them. In my "previous life" back in Germany I never even thought of killing an animal myself. I do not go out and shoot hundreds of animals and let them rot. I go out and shoot one goat or 10 possums or 4 - 5 turkeys etc. I hate waste. And I hate suffering. So we kill fast and we make use of the resource. And we see it as conservation (no "-ISH" at the end).

The other side of the medal is, that hunting in New Zealand is big business. This leads to the crazy and stupid thing to "preserve and manage our hunting resources". What a crap, sorry! These animals do Millions of damage every year. The list is really endless, Deer, pigs, goats, Wallabies, Possums all released at one stage for hunting or fur production and now go wild.

Make your own cheese at home - Cottage Crafts
Top

great pics pete! no need to worry where the turkey is coming from at christmas eh?
Top

Maybe some time you can expand on using possum fur in spinning and weaving. I very much enjoyed your story and pictures.
Thanks
Top

I'd really like to go hunting, especially for rabbits, and recently been invited out on a lamping expedition!
I have a black widow catapult in the lottie shed, to scare off pests.

The bow laws are very strange as of course they kill very cleanly, in the right hands!
But there's nothing to stop you running down rabbits with a dog, as long as the dog knows the difference between rabbits and hares!
On the subject of strange laws; you can kill rats any way you like, but as I understand it, its illegal to drown them!

Never give a food animal a name, its not nice to eat a friend!
Top

kirkpatc wrote:Maybe some time you can expand on using possum fur in spinning and weaving. I very much enjoyed your story and pictures.
Thanks

Hello there, yes no problem. But since you are from US and I think you refer to another animal as Possum (or was it Opossum?) just for clarification: this is the animal we are talking about: http://www.kcc.org.nz/pests/possum.asp.

Possum fibre is quite a valuable commodity here. You get paid over NZ$100 for 1kg of possum fibre. this is about 10 - 15 possums. We usually pluck them right away after they were killed. If the carcass cools down they are really hard to hand pluck. We collectthe fibnre until we have enough for blending it with wool. Because that's how it is done, it is blended with lambswool. The fibre is too short to be spun on its own. If you want to know more about possum merino mixes, have a look here: http://www.merinopossum.co.nz/ or here http://www.possumdown.co.nz/Default.aspx

Funnily enough, nobody would ever eat possum here in New Zealand. But this is purely a reputation thing. Possum is seen as roadkill and might be on the same level as rats here in NZ. I think this is stupid because they have a very tasty meat and could be a great food source.

I hope this gives you some more information. Let me know if you have more questions.

Make your own cheese at home - Cottage Crafts
Top

So, I bought a pre charged sub 12ft lb air rifle which can cleanly kill a rabbit at 40 yards if your a good enough shot. I haven't had much time to practice but once the weather drys up I'll be paper target shooting every day untill I'm confident I can kill cleanly, then rabbit is on the menu!
Top

Minnesota wrote:now to bring this discussion to the next level. Have any of you heard of "OK Noodling" or hand fishing ? it is Legal in only 4 states in the USA, and I don't understand why it would be illegal

Hi Minnesota ,In the uk we call that tickling and it is also illegal here simply because it went hand in hand with poaching, its mainly used with catching trout, i have seen them on telly catchig catfish in the USA using there arms in the southern states, is that what you mean
russ

Respect to all, be kind to all and you shall reap what you sow.
old tree man,
aka..... Russ
Top

Hello there, yes no problem. But since you are from US and I think you refer to another animal as Possum (or was it Opossum?) just for clarification: this is the animal we are talking about: http://www.kcc.org.nz/pests/possum.asp

No, you are right, your possum and our opossum are seperated by a continent, and 7 million years evolution. Here is our possum:

My fiancee hunts. I can't do it. I'm a wussy little girl like that. I do, however, shoot. Since he has a large farm from his family up north about three hours, we visit now and again and he gets to hunt. Mostly he is set by his parents to kill feral dogs that like to eat the goats or chickens, but other than that, he sometimes grabs himself something nice. Most hunted animals I can't eat (I'm Jewish and Australia has few deer) so I let him have his fun and food, which I try to cook on the fire when we camp or put in the freezer for the rest of his family.

This gun wouldn't kill a rabbit.

I fish for pleasure and food. Hunting with firearms is possible over here but it is pretty restricted.

It has always seemed to me that if you are not a veggie, the only -Ish way to obtain meat is to 'grow' it or hunt it. Meat should have as free and natural life as possible before it ends up on a plate!

To me, buying it wrapped in plastic is copping out.

But then, of course, for most folk, the plastic wrapped option is also the only practical way of obtaining meat. And I sure wouldnt fancy trying to bring up a family in town and have jobs etc.. without the convenience of the freezer section!
http://www.geoffbunn.com geoff bunn art and artist
Top
Post Reply
50 posts

Return to “Wild Foods and Foraging”