Flooding in North of UK

Politics, news, current affairs and anything else that you think should be here goes here.
Post Reply
18 posts

Flooding in North of UK

It is big news here in NZ. Three dead and 1000s affected. We get flooding, but because of the lesser population not so many people get affected by it. Nature is a fickle thing these days.
My wife's aunt in Carlisle was washed out of her house twice in two years.

Robin
'You know you are a hard-core gardener if you deadhead flowers in other people's gardens.

To err is human. To blame someone else, is management potential.
Top

Yes it is pretty bad.

A section of the M1 has been closed all day today along with 3 villages being evacuated because a Dam seems like it is about to give.

People in Shefield were stranded in offices over night. The figures for rain fall are something like 1/6 of yearly rain fall in one day.... scary stuff

Hope all the ishers are safe and dry


The pedant in me must highlight - North of England is where it is not North of UK (which would be Scotland, which is not suffering)
Ann Pan

My blog
My Tea Cosy Shop
Some photos
My eBay
Top

According to the BBC they now have 17 pumps pumping 4 million litres of water per hour!!!!!!!!

The dam is still critical but stable, although residents are still in temporary accommodation until the water level is low enough for a repair to take place.
Top

I am soooo lucky in that I live on the top of a hill. The devastation in the valley is awful. I haven't been able to travel around in the last few days but that's a small price to pay in comparison to what a lot of people I know have suffered.

Robin
'You know you are a hard-core gardener if you deadhead flowers in other people's gardens.

To err is human. To blame someone else, is management potential.
Top

Just heard there's a risk of ground frost next week! Is this weather real? Makes you wonder what we will have to learn to deal with in years to come.
Just Do It!
Top

We had groundfrost a couple of weeks ago: -1.9 degree C; and we were pretty close to zero several times this month. I've just dared plant out my pumpkins - on top of the steaming muckheap, protected by tyres and glass on top, like a hotbed. Lots of things just don't seem to grow at the moment; I've taken to covering up most stuff with fleece (keeps the bugs away, too).

But apart from that we have been lucky up here in Scotland. Plenty of rain, but nothing like down south!
Ina
I'm a size 10, really; I wear a 20 for comfort. (Gina Yashere)
Top

My son took photos of the floods on his way thru Sheffield on the train - he said that it was really bad. Earlier in the week I'd heard on the radio that there were several feet of water in Meadown Hall Shopping Centre - my OH - who's from Sheffield didn't believe me - until he called his son - who's still there, and he confirmed that the water was up to the counter tops on the stalls in the walk ways in the Centre! Scary stuff!

Not just the north of England 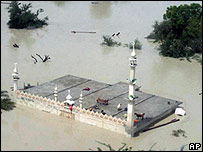 we moved back to Carlisle and while staying with mum had our stuff in storage. Mum's house didn't flood, but the storage did! It is awful and although we could say we are safe, our house wan't flooded like alot of people's, it's still horrible to see your belongings, and memories washed away. I feel so sorry for people - you can't believe it is your town, your house being deluged. Just unreal. Looking at pics now of the floods, seeing places familiar underwater it is unbelievable.
"yum, yum, piggy's bum!"

That's awful for you.

Is anything salvageable?
Top

Oh Circlecross, I am sorry to hear that. I hope you were insured.

this was two years ago it happened - and yes thankfully we were insured. It can't make up for things, silly things like the last letter dad wrote to me, covered in mud and dropping to pieces, or your favourite books that got you through exams. Time of course heals, but I do feel very sorry for people whose houses flood - that's the wolf inside the door.

Bezzie got flooded only she hasn't mentioned it here - look in the livestock section. Her poor chooks nearly drowned.

Return to “I read the news today, oh boy.”