by chickenchargrill
I love my fella's job so much. They sell lots of baby goodies and we get freebies. I love slings and have 5 so far, including a home made Star Wars ring sling. Today he came home with a Mei Tai sling. Clearly I'm more impressed by this than Dexter. 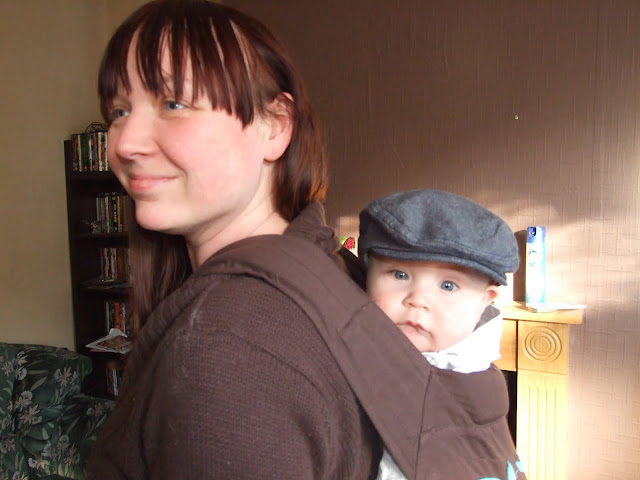 by Penny Lane
Oooo I loved my MT when I carried my little one, actually thinking about bringing it back out as, even though he's just turned 3, he still gets tired when we're out walking and I always end up with him on my back!

Lucky you having all those freebies!
Dexter looks adorable in his little hat, has he fallen asleep on your back yet??!

by chickenchargrill
Not yet, we took it for a test drive but he wasn't trying to doze off until we were home. Felt really comfy having him on my back, just got to get used to getting him in it and fastening it up! I love his flat cap, I try to make up for hats not suiting me by buying them for him.

I used to have one of the hiking back carriers for my two girls for when they got tired, always struggled to regain my centre of gravity with that one though.

by Annpan
I still use my Mai Tei for carrying LO when her legs get tired on long walks (she is 4.5)

Your LO looks terribly cute in that pic, I just want to chub his wee cheeks

by chickenchargrill
Thanks :) He is a little cutie, usually full of smiles too.

by Penny Lane
I propose a baby carrier appreciation thread - with pics!!

by chickenchargrill
Sounds good to me, carrying on from this or are you going to start a new one up?

by growingthings
I never did get on with the MT that I made, and stuck to ring slings, but I have never been able to wear my kids on my back, it's too damn uncomfortable, I have (not very severe) scoliosis so I think that it just put the wrong sort of pressure on the wrong places if I tried to back carry. I made my own and had many (umm 5 at least!

), terrible terrible thing being able to sew! I found myself making one in co-ordinating colours for my outfit to a wedding when DD2 was 3months old.....there are so many other things I could have found to do with my time, but Goodness! Isn't babywearing fun?!

My favourite was the forward facing (kangaroo) type carry, both my girls just LOVED seeing where they were going!

by chickenchargrill
You can front and side carry with a MeiTai, though haven't tried that yet. He loves the Star Wars ring sling too, though I think I'll be happier once he stops slouching so much, I automatically go to support him in it when he's leaning.

Baby wearing is the best, hate the pushchair though have one out of necessity as my hips can be a bit iffy. I always take him in a sling when we get the bus, even with pushchair spaces you can guarantee someone is one there with the biggest pushchair going and you struggle to get in. I also find it much easier to shop with sling.

And, yes, realising how easy slings are to make is a terrible thing, but satisfying to know you haven't forked out £30+ for it :)

by Sparrow
I really liked my MT and Moby! Was sad when my daughter decided that walking was much more fun!

chickenchargrill wrote:Sounds good to me, carrying on from this or are you going to start a new one up?

Might as well carry on from here if you don't mind the hijack?!

Will have to get OH to take a picture for a recent shot, I'll have to dig out ones from when he was little.


You know, I never got on with ring slings. I actually ended up selling the one I'd bought and got a Moby instead, then when he got too heavy for the Moby I got an EllaRoo wrap.
When I was pregnant I made a few Mei Tei's but they ended up being too painful as I hadn't padded them so I made a new one full of padding after a while and didn't look back.
I put my son up in the MT yesterday and walked around the house for a bit. Still really comfy and he thought it was hilarious!

by Mr and Mrs luvpie
oooo i have to admit to having abit of an obsession here :D

is it a freehand, i've seen the design before but ask as there have been some pretennd ones doing the rounds

by Mrs H
That sling looks fab! However I'd never even thought of making my own. My youngest is nearly 18mths and only just on her feet, we live out in the country and its a pain when we try and walk the dogs as a family as she wriggles so much when carried!! Has anyone got a sling pattern? Xx

by chickenchargrill
Moby wrap is the easiest - mine is just piece of 100% cotton material 4.6m x 76cm, a little larger than that to sew the edges. You can go longer than that if you like. Then just look on youtube for how to tie it. Looks tricky at first, but you'll soon get the hang of it.

If she's a wriggler, you might find the moby wrap style easier to carry her about in.

by chickenchargrill
If she likes to be carried on your back - this Mei Tai pattern looks quite good. Make sure you have plenty of padding in the strap though.

http://www.sleepingbaby.net/jan/Baby/man-tai.shtml
All times are UTC
Page 1 of 3