Getting rid of the fairy stories

If I said to a fairly representative group “Take some fruit juice, squeeze some lemon juice into it, empty a bag of sugar into it, top up to about a gallon with water from the tap and then stir or shake until everything’s dissolved” then I’d witness no signs of panic, no biting of nails or gnashing of teeth. If I added “Now stick some yeast into it” I’d bet that half of my audience would start to back off. If I then complicated matters further by asking for isolation under an airlock, or further additions of grape tannin and various salts of nitrogen and potassium, an enzyme or two and a vitamin complex … well, how many of that audience would be left? Not many.

Which is a shame, of course. Lots of people want to make their own wine, but lots of people give up the idea before they even start. They read a little about the process and become overwhelmed by tales of tradition, absolute hygiene, things which can go wrong, exploding bottles, complex recipes – the list goes on. There’s only one way to deal with this – the myths, rather than the bottles, have to be exploded. Fortunately, that’s not too difficult a thing to do.

So, to begin, here’s what you actually NEED to make wine: flavoured and sweetened water, and yeast. That’s it for the ingredients. Now, something to put it in. Virtually anything will do as long as it’s clean and coverable. That’s the lot. Now you can make wine.

I could stop right there – really I could! That was six sentences which actually tell you everything you will ever need to know about winemaking. That’s how simple it is. Everything else, then, is decoration – nice to know about, but nowhere near as important as what you’ve read above. Bear that in mind. You can always walk the five miles from A to B. A bicycle makes it easier and quicker, but you don’t need one – you’d still get there – and a bicycle necessitates a pump and a helmet. A car makes it easier still, but now you have all the ancillary complications of fuel, licences, parking fees … you get the point, I’m sure.

Hidden in there is the real winemaking secret. YOU don’t make wine. YEAST makes wine. YOU must become a yeast warden. YOU must provide an environment which is yeast-friendly. The YEAST then performs all of the incredibly complex chemistry which turns your flavoured and sweetened water into wine. Now, how difficult can it be to produce a nice environment for what is, after all, a very simple fungus – and one which, as it turns out, is very difficult to kill? Yeast can be dried or frozen, or both, and still survive. It can be starved – that’ll slow it down but it won’t kill it. To kill yeast off, you have to take its environment to extremes of heat or chemical hostility which would be virtually impossible to achieve without artificial aids. It’s very, very difficult to prevent yeast from doing what yeast does.

Alright, then – what does yeast do? Once again, it’s simple. A yeast cell has very few aims in life – actually, only one. It reproduces. To do that it must nourish itself, and it does that by breaking down sugars. After extracting the tiny amount of energy needed by a single cell, it excretes the waste products – carbon dioxide and alcohol – in roughly equal amounts by weight. There’s the magic word: alcohol is the thing that you, as the yeast warden, have been working towards all of the time.

So there you go. Simply by not artificially producing conditions which yeast doesn’t like, you’re going to harvest alcohol. Much easier than growing a lettuce, believe me. It may not have escaped your notice that, apart from flavour, all of the conditions for winemaking can apparently be met by adding yeast to a straightforward solution of sugar; that is to say that wine really can be made from water. It isn’t quite as simple as that, but it’s basically true – an alcoholic drink can easily be made with no fruit additions at all, just using water straight from the tap. Now I ask you – how much easier would you want it to be?

THEM THERE THINGS THAT GET IN THE WAY

It’s always the case, isn’t it? A very simple process becomes inordinately complicated by “experts”, so much so that it takes on a mystique, a murky surround of arcane knowledge, which only said “experts” can penetrate. Without those experts to interpret the secret initiations, winemaking becomes fraught with pitfalls, a scary thing to undertake. And, whichever way you look, the experts are there to intercept you and inform you of the error of your ways. The problem here, of course, is that there are several groups of winemaking experts, and not one of those groups agrees with any other group. Let’s have a quick look at the schools of thought …

These are the people who will tell you that only the old, old recipes are any good (usually the ones which use no added yeast). Our ancestors, they tell you, spent centuries making their wine their way, and who are we to gainsay them? There’s a problem here, though. Cider, mead and ale have, indeed, been made in Britain for centuries – but we’re talking about wine. To make wine from the fruits available to the average Brit, added sugar is a necessity. But, until 1874 when Sugar Tax was abolished, sugar was simply beyond the financial reach of the great majority of people in the country. Between the 14th and mid-19th centuries, the average price of sugar ranged between the equivalents of £80 (earliest) and £10 (latest) per kilo. At that rate, it’s much cheaper to import your wine from France – which is precisely what any wine drinker then did – rather than risk a precious commodity. The modern winemaking movement began in about 1970 or so. Now, take away a few war years when sugar was mostly unavailable, and you’re left with around 86 years in which to develop this “old country” tradition.

The tradition is, I’m afraid, a complete fairy story. It never existed. Our late 19th and early 20th century forebears certainly did what they could, but most of the time they were guessing. It shows – a lot of their recipes fail and others produce terribly out-of-balance wines which have to be heavily disguised by overwhelming any faults with massive amounts of sugar. Take my advice. Read the old recipes and smile, as you would when reading the recipes from the kitchens of Henry VIII – but for goodness sake don’t even think about using them (at least, not without heavy modification).

These are the people who insist that the only true wine is one made from grapes (wrongly – there are two definitions of wine in the OED). This doesn’t mean that they disdain the making of wine from other fruits – merely that any such wine should taste as if it had been made from grapes. And it is certainly possible to achieve that. However, their recipes are amazingly complex and demanding (and usually involve the addition of at least some grape juice) – demanding enough, anyway, to frighten any beginner off to a safe distance. Take my advice again – stay well away from such recipes until you are totally comfortable with the basic stuff.

This set of Einsteins (OK – he was a physicist) will insist that wine cannot be made without the most scrupulous standards of hygiene and the ever-present aid of a battery of chemicals with frightening names. Well, there’s hygiene, and then there’s cleanliness, if you see what I mean. Imagine that, just before beginning your first-ever apple wine, you had to don an NBC suit-style outfit (having first washed your hands) and then undergo a thorough drenching with a bactericidal solution sprayed into every crevice of that suit. Ridiculous? Hmmm. But that’s what you’re expected to do with your ingredients and equipment. There’s certainly a degree of cleanliness which is only common sense – but there’s also a line around obsession which can easily be crossed.

The use of winemaking chemicals is a subject which creates strong discussion. There are those who wouldn’t be seen dead without their chemicals, and there are those who wouldn’t be seen dead with them. Both sets of people, though, make wine. That should be enough to tell you that you needn’t worry too much about those chemicals. We’ll deal with them at a later point but, for now, bear in mind that most of the chemicals have been commonly available for only a few decades at most – yet people made wine before then.

These are the culmination of all of the winemaking research which has gone on since the 1970s, and a few of them actually understand the results of all that research. Not many, though. They’re the ones who will tell you that you absolutely must degas (that’s de-gas rather than a French painter) a wine, forgetting that any wine will quite happily degas itself given enough time. They’ll also insist that fermentation temperature should be tightly controlled, forgetting that most people have a choice between the airing cupboard and the garden shed. Look around the internet – you’ll find them easily enough.

Admittedly, these sketches are mere caricatures. But I remember being a beginner and being flummoxed by contradictory advice, wildly varying recipes and over-technical methods. What it all boils down to is this …

Do you want to make your own wine? If the answer is yes, then I’m telling you that you can do so very simply and cheaply, and you can learn how to do it in a progressive and enjoyable manner, taking on more complex procedures if and when you feel the need to do so. But, to put it at its simplest, you can make wine in a bucket with hedgerow ingredients and a bag of sugar. At this moment, the cheapest sugar I can find costs 66p per kilo, and that’s enough to make a gallon of wine – or six bottles. Add in the cost of your yeast and maybe boiling a kettle and what have you got? A pleasant drink at less than 15p per bottle. This cannot be bad.

Part 2, in which we take a closer look at making a constructive mess in a bucket, is available here. 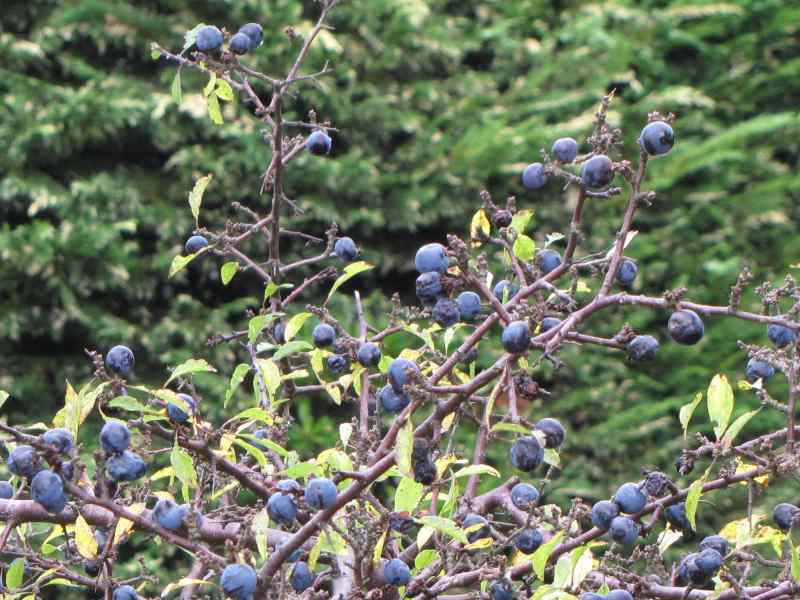 Sloes: Not just for gin