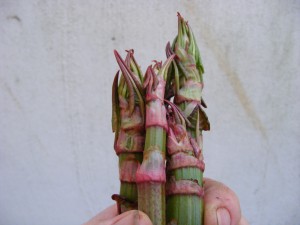 I love this season as its a time when gardening, nature spotting, foraging and home brewing can all start in earnest. Its a time when food starts to appear, everywhere. Here are my favorite wild plants to expect in March almost anywhere in the UK and across much of North America. These foods were all found in Bristol, UK during March.

The sap of the Birch rises throughout March in the UK, this is just before the tree is about to bud. If you wish to tap a birch do not tap young trees (less than 30cm in diameter) and don’t tap trees that have been tapped in the previous year. If you plan to tap in a populated area check the whole tree for signs of previous tappers, normally a tell tale bit of wood is sticking out the tree as most people seem to be messy at plugging up the hole.

To tap simply drill a few cm inside the bark of the tree and push a drinking straw or a length of tubing into the hole. The Sap will drip out and you can direct it into a bottle. This can then be turned into Birch sap wine.

Yes, Japanese Knotweed can be eaten as a food; it makes for a delicious substitute for Rhubarb. Go for the new shoots at around 15-20cm any taller they can be a little too tough. Although it has never happened to me, Robert K Henderson reports in his highly informative book, the Neighbourhood foager, that younger shoots can cause stomach upset.

If picking do not leave any of the plant on the floor or waste a single morsel. Just one piece the size of a thumbnail can spread this invasive plant and you might even get a criminal record for doing so.

To read more about Japanese Knotweed including a recipe for knotweed fool, have a look at my blog.

I say root of the dandelion as it is during March that they have grown fat ready to push that stored energy into throwing up bright yellow flowers next month.

Dig up the roots with a trowel or a spade, cut off the tops, (which can be made into a beer using this recipe – substituting the hops), and wash them. The resulting white roots can be slow roasted in the oven, I tend to keep a baking tray full of roots which I then put in the oven after cooking. This means I am using no extra heat in order to roast my dandelion roots. It normally takes four or five oven sessions.

If you really can’t wait then bake in the oven for a couple of hours on about 100c / 220f, or until the roots have turned to dark brown. Next put them in the grinder section of your blender and grind to fine powder, they can now be used in a similar fashion to coffee grinds.

I would like the name of dandelion coffee to be changed to delicious dandelion drink or anything but coffee as it immediately makes people think it will taste of coffee, it really does not but is a great drink – just don’t think of it as a coffee it could never be a substitute. It is much more similar to barley cup if there is need of a comparison so perhaps dandelion cup would make for a better name.

To eat dandelion roots simply cut up like you would carrots, lightly fry in butter for a couple of mins then cover in water and simmer until soft. They are an acquired taste which some, such as Richard Mabey in his seminal work – food for free suggests that you should try with soy-sauce, this I think disguises the flavour which may be a bonus when first tasting.

Hop shoots are considered to be the most expensive foodstuff by weight other than saffron and some truffles. They can be used like asparagus.  Hops were introduced in the middle ages as they were (and still are) used in making beer.

In the UK hops tend to grow more in Kent and around Herefordshire and on my allotment and if you are lucky you will find some escapees from gardens and allotments elsewhere. As I live in Bristol I have never found enough to really experiment with hop shoot recipes and tend to just steam the shoots, but you might benefit from these recipes.

Nettles are pretty much available all year round as long as you only pick the top few leaves, but in March the new growth means that younger nettles are available, so picking is easier. There are many uses for nettles and we have covered some of the edible uses on this site such as nettle beer, nettle haggis and nettle soup. It also makes an ok wine.

You should wear gloves when picking to avoid getting stung and wash the nettles before use.

Also known as stick weed or Sticky Willy (in Scotland) In China Cleavers is eaten as a vegetable. You should discard the stems as they are far too stringing and just use the leave as with  many wild foods use as you would spinach but unlike many foods I would suggest to use in small quantities perhaps to bulk out a soup as it is not the tastiest of vegetables.

Cleavers use as a spring tonic is a far more suitable use, simply fill a jug with cleaver cover in cold water and leave overnight. The resulting drink can be refrigerated and drank by the wine glassful. It is said that if you drink nothing but cleavers juice for 60 days your skin will be so beautiful everyone will fall in love with you. At the moment I have been drinking it for a about 30 days (along with other drinks) and have noted a small improvement to my skin although on the downside I seem to be farting much more, which might repel all of those would be admirers.

To find out more about foraging

To find out more about wild food and foraging then please join us on one of our foraging courses. Or search around this section of our site. 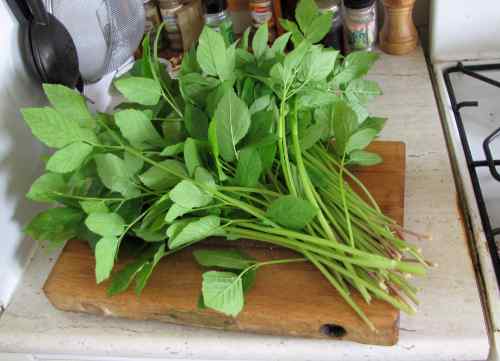