If you’ve read MKG’s series, Taking the fear out of wine making – and if you haven’t, I’d recommend it – you’ll know that it’s possible to start making wine with very little by way of specialist equipment – just a bucket, in fact. Here’s a recipe for wine-in-a-bucket using foraged ingredients that might be more familiar in another drink. 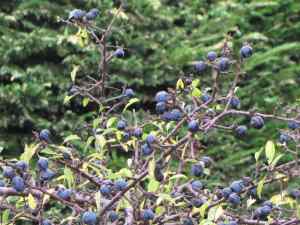 Sloes are the fruit of the blackthorn tree, which may be found growing wild in hedgerows. They’re often used to make sloe gin, but to me, this feels like a waste of money. If I’ve bought gin, I’d rather add tonic water and just drink it. On the other hand, in the time it takes to make sloe gin, it’s possible to brew wine from sloes and sugar, which is a lot cheaper than gin.

The usual advice about picking sloes is to wait until after the first frost. I wasn’t sure why this was, so I did a little experiment last year. I picked some sloes a couple of days before the first frost and put some of those in the freezer, then picked some the day after the first frost. On tasting, those that hadn’t been frozen at all had the familiar (to me – you probably aren’t daft enough to taste raw sloes) face-turning-inside-out astringency. Those that had spent a night in the freezer were so mild that by comparison they seemed to have no flavour at all, though on further sampling, they did taste like plums. Those that had experienced one night of frost were somewhere in between. So there you have it, freezing really does remove the astringency. Whether this is a good thing or not is a matter for personal preference. I find that the strong flavour works well in wine. Bear in mind that gin, which is usually combined with sloes, has some pretty powerful flavours of its own.

Having picked your sloes, you might want to look around for some elderberries, too. Most recipes for sloe wine include grape juice concentrate. Having learnt from MKG that elderberries are almost identical to grapes apart from the sugar content, I use these local (and free) berries in place of the grape juice. The wine might be just as good without elderberries, but I’ve only tried it with. I should think the proportions are pretty forgiving, though, from twice as many sloes as elderberries (I mean weight – I’m not expecting you to count them) to vice versa. I usually use about three parts sloes to two parts elderberries. A total of about 3 lb (1.4 kg) fruit is enough for a gallon (4.5 l) of wine.

Once you’ve gathered your sloes and elderberries, and separated them from stalks and leaves, the next thing to do is to weigh them. You’ll want the same amount of sugar, by weight, to start with. Clean your bucket and scald with hot water, then dump the fruit and sugar in there. Pour some more hot water over, then stir to help dissolve the sugar. Bash the fruit about a bit with a potato masher, or whatever you have to hand (a rolling pin would do nicely, but would get stained), then top up with cold water to whatever quantity you’re aiming for. Assuming it’s not too hot by now, add yeast. It doesn’t matter much what kind of yeast – bread yeast will work just fine, though it’ll probably end up stronger if you use wine yeast.

At this point I depart from usual wine making methods in two ways: 1, I leave the fruit in the liquid throughout, as you would for sloe gin, and 2, I keep adding more sugar. In practice this means stirring it when I think of it (once a day, most days), adding a tablespoon of sugar once every few days, and tasting from time to time to make sure it isn’t too sweet. My reasoning for this is that I want a strong, sweet wine. Too much sugar at the beginning will kill the yeast (apparently you can have too much of a good thing) so I add it gradually, as the yeast converts the sugar to alcohol. Also – and my theory may be getting a little wobbly at this point – as the alcohol concentration increases, some of the yeast will die but, due to natural variation, there will be some that can tolerate more alcohol and that will survive. If the tougher yeast is fed and kept supplied with oxygen (the stirring), it will grow and multiply, and keep on making alcohol. Gradually, more alcohol-tolerant yeast will come to dominate: Evolution in a bucket!

As I said, possibly a little wobbly on the theory there (please do comment if you know more about this than I do) but the process seems to work. After about six weeks, the wine stops bubbling and I assume that all the yeast has died. Now is time to strain the fruit out of the liquid. If you push the fruit through a sieve, you’ll get a sweet, alcoholic, fruit pulp that can be added to biscuits, or mixed with egg, breadcrumbs (or cake crumbs) and more sugar to make a filling for a treacle tart type of pudding, or… maybe you have some other ideas?

Your sloe wine is now ready to drink. It’s a thick dark liquid at this stage; if you leave it, the solids will settle out to leave a beautiful, clear, ruby coloured liquid, but this has no discernible impact on the flavour or, indeed, texture of the drink. This is a strong, sweet wine, which I enjoy as an after dinner drink. Cheers!

Hangovers and how to Cure them naturally- By Andy Hamilton

Taking the fear out of wine making part 1 – By MKG

4 Comments on Sloes: Not just for gin