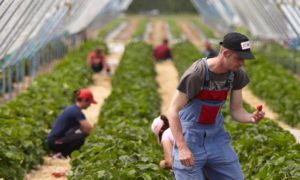 Food barely featured in the referendum, but years of jibes about Eurocrats controlling our food standards, and myths about bent bananas, left their mark. Food politics will now come to the fore in ways most consumers might not like.

This was predicted by the few studies which bothered to look at this vital area of UK life. The academic reports on Brexit unanimously anticipated not liberation but a period of turmoil and dislocation in the food system.

Farming was at the foundation of the common market in the late 1950s. The UK, then on its own, also set up a system of market support. The mechanisms differed but the goals were similar. Since the UK joined the EEC in 1973, decades of EU food law has been built, honed by crises – mad cow, food safety, trade deals, expansion.

Brexit: Angela Eagle set for Labour leadership bid as Corbyn plans to ‘carry on’ – as it happened
Prime minister returns from Brussels as 27 EU leaders meet without Britain, and Jeremy Corbyn prepares for leadership challenge after no-confidence vote
Read more
Whoever leads Brexit faces big choices on food. One option is to negotiate the tens of thousands of regulations. Another is to incorporate them all in UK law and then spend years weeding them out. The scorched earth approach is to remove them all and retreat to the lowest common denominator of the World Trade Organisation – in which case say good

Tim Lang: Whoever leads negotiations on leaving the EU faces big choices – any new food policies must have health, the environment and justice at their heart