Winter foraging may seem a bit of a waste of time, surely nothing grows during the dark, wet days of winter.  It’s true that there is a lot less than at other times of the year but even on the coldest days something can be found, you just might have to look that little bit harder.

Unlike other times of year I’ve found it best to keep an open mind about what I might want to pick that day. So, rather than go out with the idea to pick just mushrooms, just berries or just leaves I will see what’s about, especially if it is in unfamiliar surroundings.

Once the main mushroom season is over there really isn’t much around that you would pick for flavour alone.  A way round this would be to pick more autumn mushrooms than you need and dry them. Then come winter you can re-hydrate them and mix with the less abundant winter foraged mushrooms. A Couple of small ceps, some blewits or chanterelle mushrooms will be enough to impart a little flavour into the slightly bland oyster or velvet shank mushroom.  If you are reading this in the depths of winter and didn’t pick in the autumn don’t despair, spices, herbs and dairy products (especially cream) all have their place in flavouring fungi and any good recipe book should give you plenty of ideas (including our book the selfsufficienish bible)

Oyster mushrooms are perhaps the easiest to identify as they sell them many greengrocers and supermarkets. 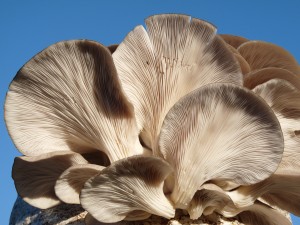 It might be worth buying a small amount of them just so you can familiarize yourself with the mushroom and identify it correctly whilst out foraging.

Wood Ear is another easy one to identify as it looks like a misshapen brown ear! It grows mainly on Elder trees and can grow in quite abundance.  Pick only the larger pieces as the very small (size 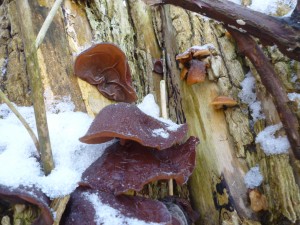 of a fingernail) when left will grow in a matter of weeks (or even days) ensuring a constant supply from the same tree.  Some find the texture of this fungus a little off-putting and as a result it can be somewhat of an acquired taste.  Try it in a Thai mixed vegetable stir-fry, flavoured with chilli, coriander and lime as this might get you used to the gelatinous texture. I sometimes mix a small amount into a mushroom pate but unless it is pureed properly it can be a little like chewing on gristle.  It is a very poplar mushroom in Chinese cookery where it might be called wood ear or jelly ear.  I’ve had it served up to me in a back street Chinese in Paris with broccoli and noodles and it was delicious.

Velvet shank is quite easy to identify but it can look like Galerina marginata, a particularly nasty mushroom. The toxins in Galerina margina (or Galerina autumnalis) are known as amatoxins give you bloody diarrhea and make you vomit about a day after ingestion. Then after a little bit of time you start to feel better so most hospitals will discharge you. During this brief respite your organs collapse causing a certain and very painful death. Needless to say I made darn sure I had he right mushroom before I ate them. A spore print is essential; look at the mushroom expert for more details.

Often you will find it is the more fiery salad leaves that survive into the winter.  These fiery tasting compounds ward off predators that may be tempted to have a little nibble.  For example Winter-Cress or American Land Cress can have an extremely powerful kick to it and can be found growing all year round even in the depths of winter.  Winter-cress generally grows in clumps and looks a lot like watercress. If you are unsure check on google images, a good foraging book or look up American Landcress in a gardening book.  I grow American Landcress on my allotment and can identify it at ever stage of its lifespan as a result.

Sorrel is another all year round favourite.  It is at it’s best in spring and summer but little clumps of it can be found all year round. It looks a little like dock but has leaves are shaped more like an arrowhead, it is also lighter green and has a very distinctive lemony flavour.  Try not to over pick as it is an important winter food for rabbits and other small mammals. Note in early spring or late winter the first leaves of Lords and Ladies can be found, these can be mistaken for sorrel by the first time forager and are highly toxic, so try to familiarize yourself with this plant before picking.

The first shoots of this common weed are edible. You have to pick it before it becomes ‘sticky’ or grows those irritable hairs. It is quite pleasant as a little snack, tasting not to dissimilar to peas.

Jack-by-the-hedge (Garlic Mustard) is a bi-annual it first pokes its head up in the early spring and once it sets seed it can have a second growth that lasts through the winter. Unfortunately this winter growth can be a little on the bitter side compared with the lighter spring leaf so it is best used in moderation in salads or in a cooked dish.

Coast – If you are lucky enough to live by the coast, Sea beet and Wild Cabbage both continue to grow in the depths of winter.  I’ve picked both in the middle of January cooking them like spinach and Savoy cabbage respectively. Sea cabbage is a little on the bitter side so it is really best to not have it as a focus of a dish (if at all!). If you have grown beet spinach in the past then you shouldn’t have a problem identifying Sea Beet but again a good field guide should set you straight.

Note: Try not to over pick any wild food as they are important winter food for small mammals, birds and insects.